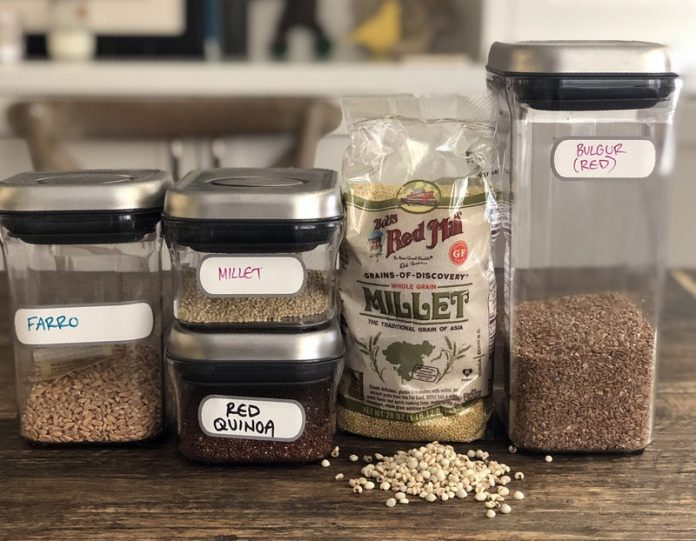 We all know by now that whole grains are good for us and that we should be eating more of them. Anyone who has dipped a toe (or spoon) into the world of farro, brown rice and quinoa also knows how satisfying and versatile the arena of whole grains can be.

But what are whole grains exactly, and which ones should you stock in your pantry?

The Whole Grains Council, a nonprofit consumer advocacy group, defines whole grains as those that contain all the essential parts and naturally occurring nutrients of the grain seed. When grain is processed (for example, by cracking, crushing, rolling or cooking it), some of those healthy qualities can be stripped away.

Nutritionists have long touted the health benefits of whole grains. Especially today, when many people are cutting back on meat, whole grains can provide texture, flavor and often protein.

Some of the whole grains you might experiment with are amaranth, barley, corn (including popcorn!), oats, farro, sorghum, millet, spelt, bulgur, wheatberries, cracked wheat, quinoa, rye, teff, and brown and wild rice. Besides eating the whole grains whole, consuming things made with whole grain flours is another way to get at the good stuff.

Whole grains can star in a casserole or grain salad, be served up as a side dish, and bolster all kinds of recipes from meatloaves to fritters. The grains are often cooked before they’re used in a recipe, usually in water or broth. They can also be used in baking, both savory and sweet. Whole grains soak up sauces beautifully, and can be made ahead and frozen.

A handful of whole grains to explore:

Brown Rice: Switching to more brown rice instead of white is one of the simplest ways to get more whole grains happening at the table. Brown rice is rice with the inedible outer hull removed but with the germ and outer layer intact. It is more nutritious than white rice, and has a denser, chewier, nuttier grain. It takes longer to cook than white rice, about 45 minutes, and the ratio of water to rice is about 2.5:1.

Quinoa (pronounced keen-wah) has been a star of the whole grain world for quite some time now. Although it might seem trendy and modern, however, it was a staple in the diet of the ancient Incas. Quinoa is actually a seed, but is treated and cooked like a whole grain. It takes beautifully to all kinds of seasonings and uses. When cooked, it has a light and fluffy texture, and a lightly nutty flavor. It’s got a high protein count (8 grams in a half cup of cooked quinoa), a nice dose of fiber and is gluten-free.

Millet (actually, a member of the grass family) can be cooked as a cereal, made into flour, served as a side dish, made into pilafs or stuffings, you name it. It can even be popped like corn. It’s rich in protein, fiber, vitamins and minerals, easy to digest, and has a slightly sweet, nutty flavor. Use millet in soups, salads and stews.

Teff, a mainstay of traditional Ethiopian cooking, is becoming popular worldwide. The grains are tiny, about the size of poppy seeds, but they are packed with fiber, iron, calcium and protein. You can use teff in many ways, cooked like oatmeal or polenta, or dry cooked in a pan and sprinkled on salads.

Farro is often called spelt in the U.S., where we are just discovering its charms, but the Italians have been creating farro masterpieces for centuries. The grain originated in western Asia. It is similar to barley, but denser and chewier. Farro is low in gluten, but not gluten-free. There is more than one way to cook it, even on the stovetop. Some people prefer cooking it like rice, with just the right amount of liquid to be fully absorbed. Others cook farro in a lot of water, like pasta, and then drain it.

Bulgur Wheat: A staple in Middle Eastern and Mediterranean regions, bulgur wheat is whole wheat grain that has been cracked and partially precooked. It’s terrific in side dishes, soup, pilafs, casseroles and salads (grain salads and green salads alike). It can be added to meat dishes like kibbeh and meatloaf to boost nutrition and bulk them up. Many people have encountered bulgur as the backbone of Middle Eastern Tabbouleh salad. It is high in fiber, low in fat, with a nice amount of protein and a lovely nutty flavor.

Frog symphony and ancient trees in a verdant Louisiana swamp