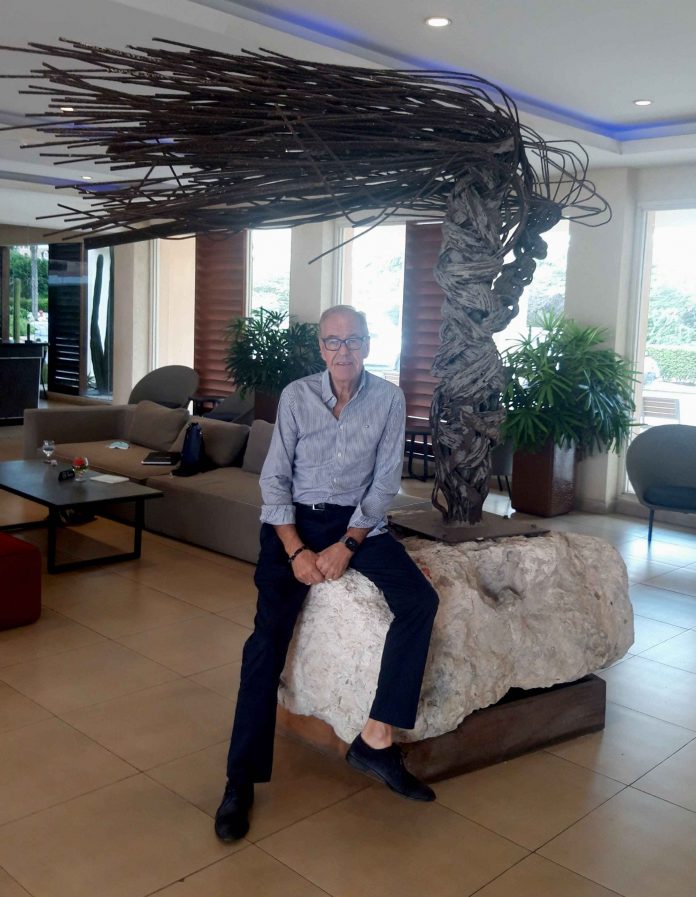 Aruba Today had an interesting talk with General Manager Alex Nieuwmeyer, you can call him ‘The Divi man’. Dutch-born Nieuwmeyer has earned his spurs in the hospitality world with years of experience running hotels in New York, Boston and Las Vegas in the U.S. 26 years ago he came to Aruba to lift Divi Resorts Aruba and promised himself before he arrived, he would not stay on this tiny island coming from big city life with a career running. “But I never left, I love Aruba and the independency to do it all here.”

“I have been with the brand 26 years now. I am Dutch and in 1975 I moved to the US working in New York as a GM for two hotels at Park Avenue. I also worked for the Sheraton cooperation long time in Boston, followed by Bally’s in Las Vegas, after that went back to Sheraton in Montreal and functioned as well as a corporate food and beverage director for the west coast of the U.S., I was based in L.A. at that time. Sheraton was sold to Starwood at some point and they closed all the regional offices. A friend of mine offered me a job in New York as GM for Doral Hotels, who had a management contract with Divi Aruba. Later Doral fell a part due to bad management of the original owner’s son and later grandson. They needed someone to go down there and I was the only one speaking Dutch_ so an obvious choice. I told myself: I will only go for one year, I am not going to stay on an island while making career in New York. That was 26 years ago from now……”

He stayed because of the opportunity to be independent, to run a property with your own creativity and space. “We do so much ourselves here and I love that. For example at Divi Tamarijn we did the new room and restaurant designs up to the purchase of the furniture.” Nieuwmeyer proves to be a man with a hands-on mentality.

How did you experience the crisis?

“In February we heard about the Covid-19 situation in Bergamo, Italy and we were thinking: Oh my, we have 1.2 million on the books for honeymooners in July and August. Beginning of March we were discussing how to compensate this, and March 15th, 2020 Aruba went into a lockdown. We were caught completely off guard by the fast course of events. And still we thought that it would be over in September/October that year. We were very optimistic.” In the meantime, Nieuwmeyer and his team took the opportunity to renovate the Divi Tamarijn rooms, turning them into more spacious ones and with a fresh, refurnished look. “We did not lay anybody off, but we do apply salary subsidy. The occupancy is still not good and with the new testing requirement of the U.S. we were hit hard again.”

All of the four Divi properties have in-house testing center and they take bookings in advance. You will be able to either book your appointment from home before departure or upon arrival at check in. “We will never be sold out. All information is to be found through the website www.diviaruba.com.”

Community commitment, what is it to Divi?

“Throughout the years we have always worked with the community, supporting local charity events and also our local artists. You can find art objects in all our properties. We then got involved with Divi Impact, a concept where partly the Divi employees contribute and we suggest a $1 per night contribution fromour guests but totally voluntarily. The YMCA Oranjestad was kind of built by Divi and after that we supported the Kids Counsil, an initiative by Princess Laurentien from the Dutch royal family which led us to an elementary school, Pius X-college, where we noticed the poor financial state of our education. Divi undertook action and realized the school’s full air-conditioning, a complete painting and we provided all children with IPads to execute their educational program. We will follow up with new TVs soon.”

The Kids Counsil, where children structurally help institutions and organizations think about strategic and social issues, dived into a Divi dilemma: internal discrimination between employees. “It was pretty hefty. The children did very well, they interviewed the employees and with their project they had to go to the Netherlands to compete with the other parts of the Dutch Kingdom. Divi actually implemented the student’s ideas like for example the cultural fair. As a result you see an increased team spirit.”

We are the Divi family, what does it mean?

“With 1200 employees and 33 cultures within the Divi we have quite an operation running. With the earlier mentioned cultural fair, we asked our employees to bring the typical food of their country to share. It was fantastic with employees dancing and eating together. We are Divi, team spirit is one of our successes. Yes, we work well with our employees and the union.”

“Tourism is very resilient, when I heard about New York on September 11th,2001, I thought: This is it, it is over, and we are done with Aruba’s tourism. But we were empty for a week and a week after the air traffic came to rescue the people that could not return earlier. The week after that, we were back to 90 % occupancy again. Of course we dropped a bit in numbers in January, February, March because September is the booking period for those months, but recovery went fast.

Right now we are very down but what we see in March and April are bookings even with the new CDC measure. We have 50 % occupancy in the books for March and April which is promising. Depending on the vaccinations, how fast they can act, and the ever-changing mutations, we are hopeful to return to 60/70 % occupancy in summer and by fall almost return to normal strength. Aruba is popular, it is safe and it has its protocols in place. Airlifts come with demand, I do not worry that much. However, for Aruba it is very important to carry out the message that it is easy to come here and that we take care of the testing.”

Aruba, what comes to your mind?