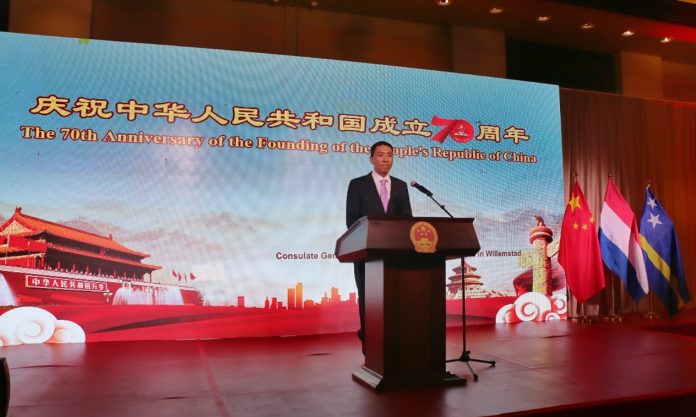 Recently the acting Consul General Xue Shan welcomed invited guests from the Dutch Caribbean to celebrate the 70th anniversary of the People’s Republic of China on behalf of the Chinese Consulate General. On this special occasion he also sent his best wishes to the Chinese communities living in the Dutch Caribbean.

The National Day Reception welcomed H.E Prime Minister Mr. Eugene Rhuggenaath, ministers from Aruba and Curacao, the governor of Bonaire, colleagues of the consular corps and many other distinguished guests. Xue Shan mentioned in his speech that over the past 70 years, since the founding of the People’s Republic of China in 1949, especially in the past 40 years of reform and opening-up, China has gone through a dramatic change, tremendous development has been made. “Living standards of more than 1.3 billion people have been significantly improved, more than 700 million people have been lifted out of poverty, and GDP per Capita has risen to 9000 USD. China has become the world’s second largest economy, the largest trader of goods, and contributed 30% to the world economic growth in recent years.” China has made a historic leap from standing up, getting rich to getting stronger. All these achievements are due to the opening-up, the hard-work of Chinese people and the socialist system that suits China’s condition the acting Consul General said. “At present, China is still a developing country, facing all sorts of risks and challenges, there are nearly 20 million people living in poverty, development still holds the key to address all the problems. Guided by the vision of innovation, coordination, green, open and shared development, China is engaged to realize Two-Centenary Goals, China’s reform will never stop, and its doors will open even wider.”

According to the acting Consul General China’s development will bring more opportunities to the world, China will follow the principle of wide consultation, joint contribution and shared benefits, to develop global partnerships, to expand friendly cooperation, and to achieve win-win results. “Last April, the Second Belt and Road Forum for International Cooperation was held in Beijing, This year’s forum is larger and more substantive than the first one, attracting more countries and producing more results. The Belt and Road Initiative is designed to expand new space for promoting common prosperity under the guidance of the belt and road spirit of peace and cooperation, openness and inclusiveness, mutual learning and mutual benefit. The Belt and Road Initiative has become the most popular public product and the largest platform for cooperation, it has been welcomed worldwide.”

The Chinese Communities work very hard to pursue their business development, and also make positive contribution to the local economic and social development, their culture activities are widely welcomed, they are getting along well with other ethnic groups and forms the integral society. They are the main players to bridge the two peoples. This year marks the fifth anniversary of the establishment of the Chinese Consulate General in Willemstad. “We are glad to see that the exchange of two peoples and mutual understanding have been much developed, we have enjoyed a more broad and diverse relationship, built on mutually beneficial engagement and growing relations，more and more local people are willing to travel to China for leisure or for business，more and more local people are interested in learning Chinese language and Chinese culture, more and more Chinese people know about Curacao and the Dutch Caribbean. Friendship, which derives from close contact between the people, holds the key to sound state-to-state relations. The Chinese Consulate is willing to continue to preserve and further consolidate our bilateral friendly relations.”