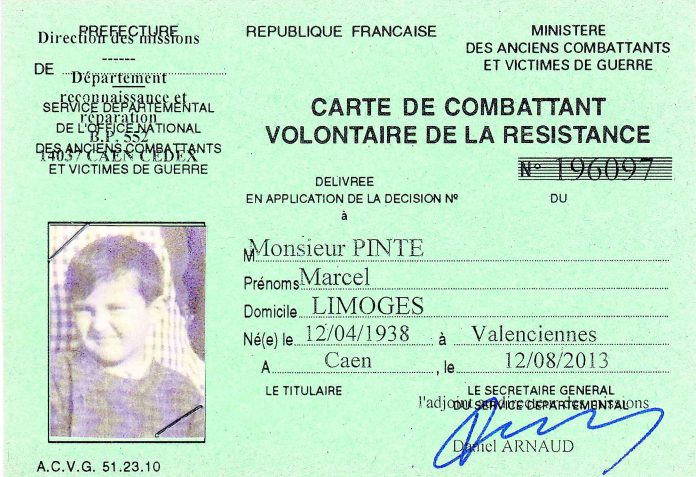 Quinquin, his code name, followed orders, crossing enemy lines to pass messages if needed. In the end he was killed by friendly fire, at the age of 6, likely France’s youngest member of the Resistance fighting occupying Nazis during World War II.

Marcel Pinte has only recently been getting his due. Just last week his name was inscribed on a monument to the war dead in Aixe-sur-Vienne, a town of less than 6,000 in central France, near his zone of operation. He is among the fallen being honored Wednesday, when France commemorates the Nov. 11, 1918 armistice ending World War I and pays homage to all those who have died for the nation.

The little boy lived at the heart of the “army of the shadows,” as Resistance fighters were known, led from London by Gen. Charles de Gaulle and on the ground in his patch of France by his father, Eugene Pinte, a local Resistance chief who set up an operations center at a farm outside Aixe-sur-Vienne. His farmhouse received coded messages from London, and parachute drops of supplies in a field nearby. A street was named after the father, code-named Athos, four years ago for leading the liberation of the town.

Marcel, the youngest of five children, was put to work helping fighters with an array of tasks. He could, for instance, slip away to nearby farms to pass messages, according to accounts published by a relative, Alexandre Bremaud.

Nicknamed Quinquin by Resistance fighters, from a children’s song in northern France where he was born, he served as a veritable liaison agent, but he also was a child.

“There was a bit of carefreeness because of his age. A resident told his father to be careful because Marcel sometimes sang songs learned from fighters,” the newspaper Le Figaro quoted Bremaud as saying.

But songs weren’t what would take his life. A sensitive Sten automatic pistol dropped from a parachute of arms and munitions into a field let off a spray of gunfire when the arms were being distributed on Aug. 19, 1944.

Marcel was hit and died.

The day before, his father had led a rout of the enemy converging on Aixe-sur-Vienne. “Very touched by the disappearance of his son … the commander did not change plans and continued encircling (nearby) Limoges with his troops,” read a speech delivered by Bremaud and another family relative, Marc Pinte, for the inauguration in 2016 of the street named Eugene Pinte.

Top Resistance commanders attended the funeral of the child on the morning of Aug. 21, 1944. His father helped liberate Limoges that evening.

Several days after Marcel’s death, containers fell in the field in a final drop, but the parachutes were black.

“The British knew that the little Marcel played a real role. This parachute was the calling card sent to the family,” said Marc Pinte, who gave the newspaper Le Monde a guided tour of the area.

An official card for “volunteer combatants of the Resistance” was delivered on Aug. 12, 2013, in the name of “Monsieur Marcel Pinte” by the National Office of Former Combatants and War Victims.