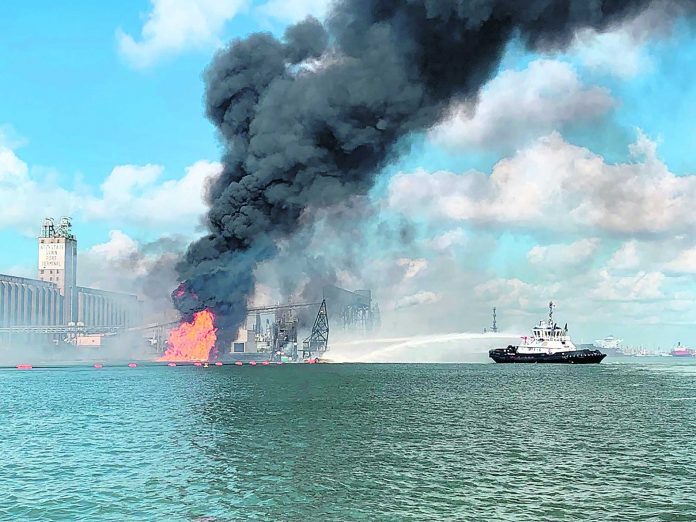 A dredging vessel at a Texas port hit a natural gas pipeline Friday, sparking an explosion that sent six people to the hospital and left four others missing, authorities said.

Initial reports indicated about 18 workers were in the area at the time, according to the county’s top elected official, Nueces County Judge Barbara Canales. Four of those people were missing, six were taken to hospitals and eight were uninjured, she said.

Corpus Christi Fire Department Chief Robert Rocha said that upon arrival, firefighters “encountered heavy fire and smoke conditions.” By late Friday morning, the supply line feeding fire had been shut off, Rocha said. One of the hospitalized workers was in serious condition, he said.

The fire was contained by Friday afternoon, according to Canales.

Gov. Greg Abbott issued a statement saying that the state was working closely with authorities in the area and that the Texas Commission on Environmental Quality was monitoring the air quality.

That agency said in a news release Friday afternoon that it has not “noted any levels of concern at this time.”

Rocha said most of the heavy smoke had been blowing into a rural area.

The National Transportation Safety Board said it is investigating the accident.

March 9, 2021
EtniaNativa clay works reflect our energy in mystical silence. Every shape and detail printed on what we create says something about who we are.

Preparing to receive the second batch of Pfizer vaccines

Aruba to me: Susan Tedesco