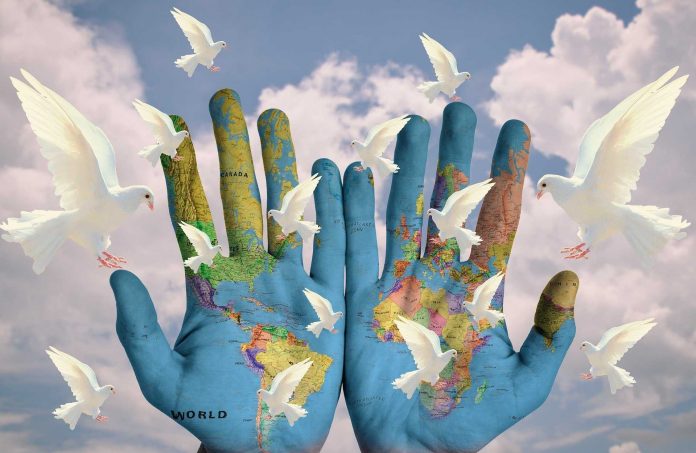 Each year the International Day of Peace is observed around the world on 21 September. The UN General Assembly has declared this as a day devoted to strengthening the ideals of peace, through observing 24 hours of non-violence and cease-fire.

This year, it has been clearer than ever that we are not each other’s enemies. Rather, our common enemy is a tireless virus that threatens our health, security and very way of life. COVID-19 has thrown our world into turmoil and forcibly reminded us that what happens in one part of the planet can impact people everywhere.

In March, UN Secretary-General António Guterres called on all warring parties to lay down their weapons and focus on the battle against this unprecedented global pandemic. While the message is intended for armed parties, solidarity and cooperation across borders, sectors and generations are also needed to win this new fight against the worst public health crisis of our time.

For the United Nations, 2020 was already meant to be a year of listening and learning. To mark its 75th anniversary, the UN has invited millions of people worldwide to join UN75, the largest and furthest-reaching global conversation on building the peaceful and prosperous future that we want.

As we struggle to defeat COVID-19, your voice is more important than ever. In these difficult times of physical distancing, this International Day of Peace will be dedicated to fostering dialogue and collecting ideas. The world will be invited to unite and share thoughts on how to weather this storm, heal our planet and change it for the better. Even though we may not be able to stand next to each other, we can still dream together.

The 2020 theme for the International Day of Peace is “Shaping Peace Together.” Celebrate the day by spreading compassion, kindness and hope in the face of the pandemic. Stand together with the UN against attempts to use the virus to promote discrimination or hatred. Join us so that we can shape peace together.

The International Day of Peace was established in 1981 by the United Nations General Assembly. Two decades later, in 2001, the General Assembly unanimously voted to designate the Day as a period of non-violence and cease-fire.

The United Nations invites all nations and people to honor a cessation of hostilities during the Day, and to otherwise commemorate the Day through education and public awareness on issues related to peace.

Why do we mark International Days?

International days are occasions to educate the public on issues of concern, to mobilize political will and resources to address global problems, and to celebrate and reinforce achievements of humanity. The existence of international days predates the establishment of the United Nations, but the UN has embraced them as a powerful advocacy tool. We also mark other UN observances.

Imeldahof Thanks Guests That Pack For A Purpose; Bucuti & Tara...