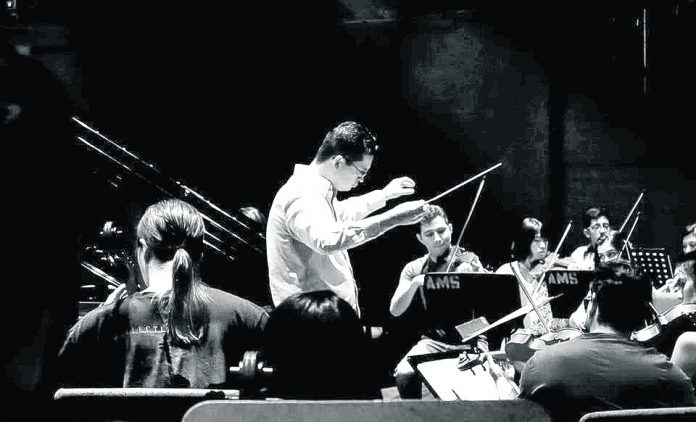 After successfully staging the Festival for twelve years in his native Maracaibo, Simon was forced to abandon Venezuela and look for another country, preferably close to home, where he could continue with his dream. A dream he has had since he was a studying music in Germany and Switzerland. At the age of 20, when most musicians are still struggling in schools of music the Venezuelan prodigy returned to his native Maracaibo, and with his family, founded the Nuevo Mundo Festival and Academy.

Simon’s love for Aruba dates back almost fifteen years. In 2005 I met Simon after the last concert of that year’s festival, and when he learned that I was the president of the Aruba Scholarship Foundation, he spontaneously offered to come to Aruba and perform in a fundraising concert, gratuitously. Accompanied by the well-known Venezuelan pianist/harpsichord player Abram Abreu, Simon played to an almost full Cas di Cultura in January 2006. That evening Simon Gollo helped the Aruba Scholarship Foundation with a donation of almost 25 thousand florins, money that payed the tuition for three Aruban scholars the following semester at a university in the United States.

Simon again showed his love for Aruba when Armand Simon created the Aruba Piano Festival. Simon had connections with musicians all over the world and was instrumental in getting high caliber musicians, including himself, to participate in the festival. The Piano Festival conducted a piano playing competition among the students and the winner was awarded a scholarship to participate in masterclasses at the Nuevo Mundo Festival and Academy in Maracaibo. Simon did not charge the Aruban students for the classes, and they stayed at the Gollos’ house, free of charge. Ivan Kock, Lisa Partodikromo, are two that come to mind.

It was not a surprise that when Simon decided where he would pursue his dream, he chose Aruba.

The Aruba Symphony Festival tries to involve Arubans in its activities. Last year the Festival featured the two best known Aruban songs, “Aruba Dushi Tera,“ “Abo So” and other songs by wellknown Aruban composers, and sung by the two best known choirs of Aruba: “Ars Nova” and “Cantare” directed by Mayra Kock – Garrido, accompanied by icons of the Aruban musical scene, Edwin Kock, Ryan Maduro among others. In past years the Festival gave scholarships to an Aruban pianist and a trombone player, and has advertised that more scholarships are available this year.

The fifth edition of the Aruba Symphony Festival will inaugurate on July 17 with the participation of more than 20 Arubans: Francisca “Tica” Giel directing the Santa Ana School Children’s Choir and the “Den Harmonia” female choir, accompanied by the pianist Johnny Scharbaay.

During the following 10 days, Aruba will be in the grip of concerts by over 100 world-renowned musicians and conservatory-level music students. As part of the Academic program, the Festival will also feature the internationally well-known Dr. Benjamin Zander who will give his world acclaimed lecture, “The Art of Possibilities.” This is an event you don’t want to miss.

Simon is founder and President of the Aruban not-for-profit Nuevo Mundo Foundation that organizes and produces the Aruba Symphony Festival and Academy, of which he is also the Artistic Director, its heart and soul.

Simon Gollo has given some 30 concerts in tens of countries all over the world during the last twelve months. Next month he will go on a three nations’ tour, Czech Republic, Germany and Austria, as a member of Q-arte String Quartet of Bogotá, Colombia. Later this year he will be directing orchestras at several concerts in Brazil, and Simon has also been invited to direct orchestras in Vietnam in 2020. On his way to Bogota this week he will be in Aruba for a short visit to help raise funds for the Festival.

Culture and Education, together with the Family, form the backbone of the Aruban society.

The Aruban government has embraced the concept of the LeerOrkest that education without music is not education, and it is now striving to bring music back into the curriculum of the basic schools. According to the philosopher/educator Emil Friedman, culture without music is not culture. The Aruba Symphony Festival is Aruba’s strongest expression of our musical culture and we are indebted to Simon Gollo for his decision to stage the Festival here. Because the musicians come from so many parts of the world, the Aruba Symphony Festival, like the festivals of Tanglewood and Aspen, has also become a strong platform for publicity of Aruba as a tourist destination.

This week the government and the private sector will have a wonderful opportunity to let Simon Gollo know that Aruba appreciates what he is doing for our island. As Honorary President of the Symphony Festival, I urge all Arubans to support the Festival so that it will always be ARUBA’s Festival. Contact me at clydeharms@yahoo.com, if you will, to find out how you can.