After spearheading The Kitchen Table for five years, receiving notable recognitions in USA Today, The Daily Meal and earning the #1 spot on Tripadvisor’s list of Fine Dining Restaurants in the Caribbean, Chef Urvin Croes has now moved on to higher heights. Infini, his new chef’s table, which opened at the Blue Residences in November 2020, allows the Michelin-trained Aruban culinary artist to create gastronomic experiences unconfined by cultural or regional expectations. The former The Kitchen Table space has since been renovated into a suitable culinary studio to host this vision. In describing these changes, Croes says: “We opened up the entire kitchen and elevated the dining tables so guests have a front row stadium-like view of each step of the preparations. The spotlights, which we carefully choreograph, follow the plates’ transition from blank canvas into culinary works of art.” 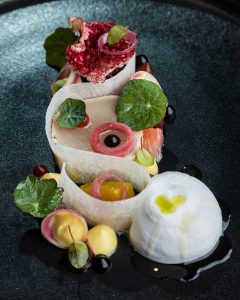 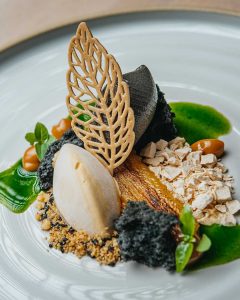 “It is a flavor that you cannot define, but you can create.”

He had been sitting on the first menu for over a year. Inspired by umami, one of the five basic tastes, and also Japanese for “essence of deliciousness”, Chef Croes strived to organically produce this palate in each dish of the eight-course Chef’s Impression. “It is a flavor that you cannot define, but you can create. Take our popular langoustine for example; we combined elements that are rarely paired together: the bitter, sour and salty flavors of the lemon cream, kombucha, green grapes, watercress and achiote, fused with the sweet and delicate taste of the langoustine induce ultimate umami.” 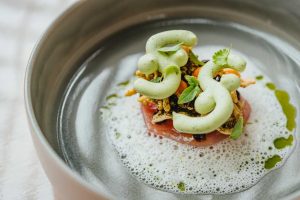 After hosting the first menu for three months, the Executive Chef introduced a second tour de force in February 2021 — this time a pescatarian menu dedicated to Lent, of which Croes has to say: “I wanted to focus on the finest fish in the world, they are the protagonists of this season.” Visitors can experience the second Chef’s Impression until May 2021, at which point Croes and his team will reveal exciting new flavors for the summer.

“Without a great team, there is no great chef”

“There is very little I can do by myself. Without a great team, there is no great chef”, says Croes, while raving about the six young professionals sharing his kitchen. All graduates of Aruba’s EPI College and familiar faces to the Chef as each one has completed their culinary internship under his guidance. In fact, Infini’s Chef de Cuisine, Ashwin Maduro, was Urvin’s very first student, before relocating to Amsterdam, where he worked at several Michelin-starred restaurants, including &moshik (formally &Samhoud Places). Having recently returned to Aruba, Chef Maduro is thrilled to be reunited with his first mentor and hopes to secure Aruba’s space on the global map of unique culinary experiences. Similarly, after four years working in the two-Michelin starred restaurant Spectrum, Chef de Partie Moises Ramirez returned home to share his vast experience in formulating recipes with meticulous attention to detail and consistency. Further down the kitchen line, Chef de Partie Alvaro Yi, who has worked at the two-Michelin starred FG Restaurant, is all about expressing himself through cooking and plating to create art that you can eat. Mixologist Marc-Anthony Rannis brings eight years of experience in the fine dining industry to Infini. His fine craftsmanship is displayed in the unparalleled wine pairings and signature cocktails, which include his personally homemade syrups, garnishes and fresh local ingredients. Maître D’ and Junior Sommelier Jessica Theysen, who previously managed renowned Chef Dennis Huwaë’s Restaurant Daalder in Amsterdam, is a true storyteller. From the moment she serves the Salinity welcome drink and the culinary tale begins, she takes you on an adventure around the world to discover never-before-tasted combinations. Then, towards the end of the night, it is his time to shine — Pastry Chef Jean-Claude Werleman, that is. After spending the last two years perfecting his recipes in the Pastry Department of the Ritz Carlton Aruba, Werleman joins Infini to continue exploring his passion for experimenting with colors and bold flavors. 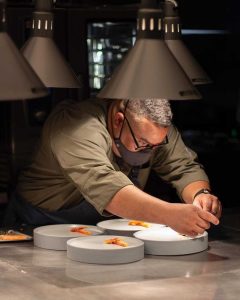 “The goal is to leave our visitors speechless. The look on their faces whenever they take the first bite says it all and it is priceless”, shares Croes, with a smile. Reclaiming the spot of number one restaurant in the Caribbean is also in sight, but this time he will not stop there. “In the end, we want Aruba to be recognized for its culinary mastery. We have trained the best culinary artists right here on the island and they have proven themselves internationally in the most renowned kitchens in the world. Now it is time to show that Aruba is a culinary destination of its own. Who knows where that will take us; hopefully to infinity and beyond.”

Infini located at Blue Residences currently serves an eight-course Chef’s Impression to up to 21 guests starting at 6:30PM. To make reservations visit www.infiniaruba.com or call +297-699-3982. 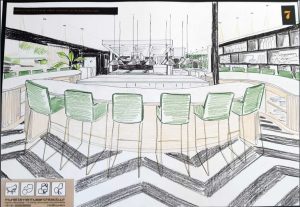